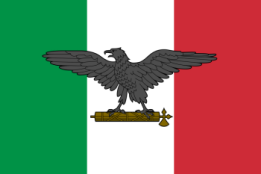 The Marina Nazionale Repubblicana (National Republican Navy) (1943–1945) was the navy of the Italian Social Republic, a German puppet state in Italy.

The Marina Nazionale Repubblicana was formally created in late September 1943, following the establishment of the Italian Social Republic. Most of the Regia Marina fleet, however, after the Armistice of Cassibile between Italy and the Allies on 3 September 1943, had sailed to Allied-controlled ports (chiefly Malta), and the few ships that remained in Italian ports, most of them undergoing maintenance or repair, were either scuttled or captured by the German forces and incorporated into the Kriegsmarine. The MNR was thus left without a real fleet; even ships abandoned during construction in Northern Italian shipyards (among them many Gabbiano-class corvettes and Ariete-class torpedo boats) were completed for the German Kriegsmarine, that refused to transfer any of them to the MNR.

The first Chief of Staff of the MNR was Admiral Antonio Legnani, who however died in a car crash less than a month after the creation of the MNR. He was succeeded by Captain Ferruccio Ferrini. Junio Valerio Borghese's Decima Flottiglia MAS was formally part of the MNR, but it operated as a de facto independent unit under Borghese's undisputed leadership. Ferrini did not tolerate this independence; he accused Borghese of having contacts with the Allies and the anti-Communist partisans, and of conspiring to depose Mussolini and replace him at the head of the RSI. In January 1944 Borghese was summoned by Mussolini and placed under arrest, but this immediately brought the Decima MAS personnel on the verge of mutiny; the situation settled after Borghese was released, following German intervention.

The fleet of the MNR never amounted to more than a small number of MAS, submarine chasers, midget submarines and assault craft, the latter operated by the Decima Flottiglia MAS. Part of the personnel recruited by the MNR served on Kriegsmarine ships in the Mediterranean, whereas others manned coastal batteries in Northern Italy.

The Marina Nazionale Repubblicana only reached a twentieth the size of the Allied Italian fleet, and consisted of nine motor torpedo boats (two large and seven small), dozens of MTSM small motor torpedo boats and MTM explosive motorboats. The National Republican Navy also operated fifteen CB-class midget submarines (ten in the Adriatic and five in the Black Sea) and one larger submarine, CM 1, as well as the auxiliary submarine chasers Equa and Antonio Landi, the trawlers Cefalo and Pegaso, and a flotilla of minesweepers based in Venice.

An unknown number of MTSMs were active with the navy of the Italian Social Republic. Most of their operations took place in the Adriatic sea, sometimes with mixed Italian and German crews.

Of their CB midget class submarines, five were initially given to the Italian Social Republic by Germany, but later ten more boats were transferred by the Germans to the RSI Navy and served in the Adriatic. One was used for spare parts, seven were sunk and two were captured by the Allies.