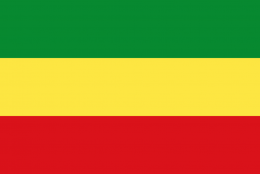 The Ethiopian Navy, known as the Imperial Ethiopian Navy until 1974, was a branch of the Ethiopian National Defense Force founded in 1955. It was disestablished in 1996 after the independence of Eritrea in 1991 that left Ethiopia landlocked.

The Ethiopian Civil War and Eritrean War of Independence both ended in 1991 soon after the fall of Assab, and Eritrea became independent, leaving Ethiopia landlocked. The Ethiopian Navy remained in existence, left in the curious and unusual position of having no home ports. Nonetheless, directed by its headquarters in Addis Ababa, it continued occasional patrols in the Red Sea from ports in Yemen. In 1993, Yemen finally expelled the Ethiopian ships; by then some had deteriorated too much to be seaworthy, and the Ethiopians left them behind in Yemen. Ethiopia had become a hulk after arriving in Yemen in 1991 and was sold for scrap in 1993; other Ethiopian ships were also scrapped or scuttled.

Those ships which could get underway from Yemen in 1993 moved to Djibouti. For a time it was thought that the Ethiopian Navy might survive, based at Assab in Eritrea or at Djibouti, and Ethiopia even requested that Eritrea lease it pier space at Assab from which to operate the surviving Ethiopian Navy. Eritrea refused the request. Proposals also were made for Eritrea and Ethiopia to divide the ships, with ships manned by both countries operating from Eritrean ports as a kind of successor to the Ethiopian Navy, but Eritrea soon expressed a desire to organize an entirely separate Eritrean Navy.

By 1996, Djibouti had tired of having a foreign navy in its ports. The Ethiopian Navy had fallen behind in paying its harbor dues, and under this pretext Djibouti seized all of the remaining ships on 16 September 1996 and put them up for auction to pay the back dues. Eritrea expressed interest in 16 of them, but finally limited itself to purchasing only four of them – an Osa-II class missile boat and three Swiftships Shipbuilders patrol craft – in order to avoid exacerbating an international crisis with Yemen. The rest of the ships were scrapped.

Later in 1996, the Ethiopian Navy's headquarters in Addis Ababa disbanded, and the Ethiopian Navy ceased to exist. Its only remnant is the patrol boat GB-21; moved inland to Lake Tana and manned by Ethiopian Army personnel, she survived as of 2009 as Ethiopia's only military watercraft.