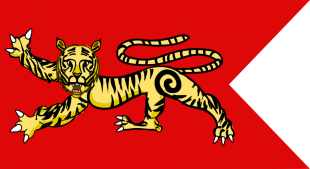 The Chola Navy comprised the naval forces of the Chola Empire along with several other naval-arms of the country. The Chola navy played a vital role in the expansion of the Chola Empire, including the conquest of the Ceylon islands and naval raids on Sri Vijaya (present-day Indonesia).

The navy grew both in size and status during the Medieval Cholas reign. The Chola Admirals commanded much respect and prestige in the society. The navy commanders also acted as diplomats in some instances. From 900 to 1100, the navy had grown from a small backwater entity to that of a potent power projection and diplomatic symbol in all of Asia, but was gradually reduced in significance when the Cholas fought land battles for subjugating the Chalukyas of Andhra-Kannada area in South India.

Historians divide the Chola Reign into three distinct phases. The first era is the period of Early Cholas .The second phase is of Vijalaya Cholas and the final phase in the empire was the Chalukya Chola period.

The Cholas were at the height of their power from the later half of the 9th century through to the early 13th century. Under Rajaraja Chola I and his son Rajendra Chola I, the dynasty became a military, economic and cultural power in Asia. During the period 1010–1200, the Chola territories stretched from the islands of the Maldives in the south to as far north as the banks of the Godavari River in Andhra Pradesh. Rajaraja Chola conquered peninsular South India, annexed parts of Sri Lanka and occupied the islands of the Maldives. Rajendra Chola sent a victorious expedition to North India that touched the river Ganges and defeated the Pala ruler of Pataliputra, Mahipala. He also successfully raided kingdoms of Maritime Southeast Asia.

The Ancient Chola navy was based on trade vessel designs with little more than boarding implements, though this changed throughout the history. The later day navy was a specialized force with specially built ships for each type of combat.

The Imperial Navy of the Medieval Cholas was composed of a multitude of forces in its command. In addition to the regular navy (Kappal-Padai), there were many auxiliary forces that could be used in naval combat. The Chola Navy was an autonomous service unlike many of its contemporaries. The Army depended on the Naval-fleets for transportation and logistics. The navy also had a core of marines. Even saboteurs, who were trained pearl-fishermen ,were used to dive and disable enemy vessels by destroying or damaging the rudder.