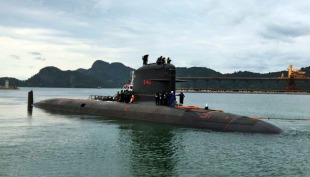 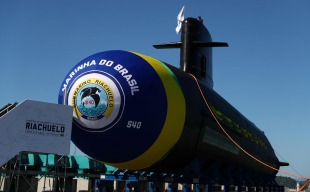 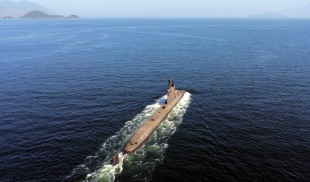 The Riachuelo (S40) is a Brazilian Riachuelo-class submarine built for the Brazilian Navy by DCNS in Cherbourg and ICN in Itaguaí, Brazil.

In 2008, Brazil purchased four enlarged Scorpènes for US$9.9 billion with a total technology transfer agreement and a second agreement to develop the first Brazilian nuclear-powered submarine, Álvaro Alberto. The hull of Riachuelo was laid down at Cherbourg, France on 27 May 2010 and it was jumboized at the Brazilian Navy Shipyard in Itaguaí in late 2012.

The first stage of construction of the submarine took place in France, at the headquarters of DCNS in Cherbourg, with the cutting of the first steel plates of the structure. At this point, technology transfer from French technicians to Brazilians began. In the middle of 2013, internal parts manufactured in France arrived, which were then integrated to the other parts built in Brazil. In September 2015, the first construction stage was completed, with the delivery of the last section of resistant hull.

The initial Navy predictions for the delivery of Riachuelo were for 2015, however, after some postponements, the boat was launched in 2018, in order to start the platform acceptance testing phase, with two years in duration, plus six months of tests of the combat systems, with its incorporation to the operative sector foreseen for the middle of 2021.