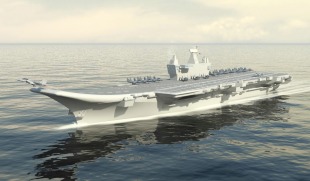 INS Vishal, also known as Indigenous Aircraft Carrier 2 (IAC-2), is a planned aircraft carrier to be built by Cochin Shipyard Limited for the Indian Navy. It is intended to be the second aircraft carrier to be built in India after INS Vikrant (IAC-1). The proposed design of the second carrier class will be a new design, featuring significant changes from Vikrant, including an increase in size and displacement. An Electromagnetic Aircraft Launch System (EMALS) CATOBAR system is also under consideration. Its name Vishal means 'giant' in Sanskrit. The INS Vishal aircraft carrier building the started in 2018. The keel was laid down in 2020. The launched planed in 2022 and its sea trials began in 2024. INS Vishal will commission in 2025.