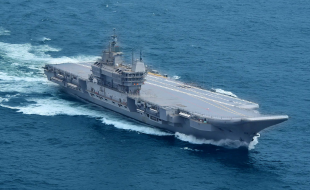 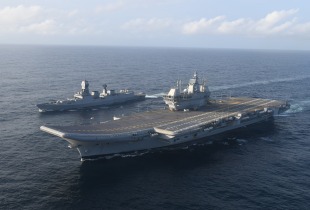 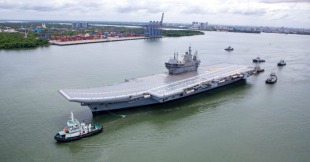 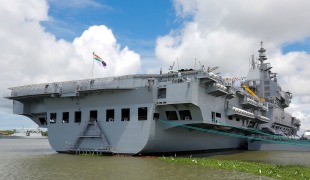 In 1989, India announced a plan to replace its ageing British-built aircraft carriers, INS Vikrant and INS Viraat (ex-HMS Hermes (R12)), with two new 28,000-ton Air Defence Ships (ADS) that would operate the BAe Sea Harrier aircraft. The first vessel was to replace Vikrant, which was set to decommission in early 1997. Construction of the ADS was to start at the Cochin Shipyard (CSL) in 1993 after the Indian Naval Design Organisation had translated this design study into a production model.

In 2001, CSL released a graphic illustration showing a 32,000-ton STOBAR (Short Take-Off Barrier Arrested Recovery) design with a pronounced ski jump. The aircraft carrier project finally received formal government approval in January 2003. By then, design updates called for a 37,500-ton carrier to operate the MiG-29K. India opted for a three-carrier fleet consisting of one carrier battle group stationed on each seaboard, and a third carrier held in reserve, in order to continuously protect both its flanks, to protect economic interests and mercantile traffic, and to provide humanitarian platforms in times of disasters, since a carrier can provide a self-generating supply of fresh water, medical assistance or engineering expertise to populations in need for assistance.

It is 262 metres (860 ft) long and 60 metres (200 ft) wide, and displaces about 40,000 metric tons (39,000 long tons). It features a STOBAR configuration with a ski-jump. The deck is designed to enable aircraft such as the MiG-29K to operate from the carrier. It is expected to carry an air group of up to thirty aircraft, which will include up to 24–26 fixed-wing combat aircraft, primarily the Mikoyan MiG-29K, besides carrying 10 Kamov Ka-31 or Westland Sea King helicopters. The Ka-31 will fulfill the airborne early warning (AEW) role and the Sea King will provide anti-submarine warfare (ASW) capability.

INS Vikrant is powered by four General Electric LM2500+ gas turbines on two shafts, generating over 80 megawatts (110,000 hp) of power. The gearboxes for the carriers were designed and supplied by Elecon Engineering.

The ship's combat management system (CMS) was developed by Tata Power Strategic Engineering Division in collaboration with Weapon and Electronics System Engineering Establishment and MARS, Russia. It is the first CMS developed by a private company for the Indian Navy, was handed over to the Navy on 28 March 2019.

The keel for Vikrant was laid by Defence Minister A.K. Antony at the Cochin Shipyard on 28 February 2009. The ship uses modular construction, with 874 blocks joined together for the hull. By the time the keel was laid, 423 blocks weighing over 8,000 tons had been completed. The construction plan called for the carrier to be launched in 2010, when it would displace some 20,000 tonnes, as a larger displacement could not be accommodated in the building bay. It was planned that after about a year's development in the refit dock, the carrier would be launched when all the major components, including underwater systems, would be in place. Outfitting would then be carried out after launch. As per the Cabinet Committee on Security (CCS), sea trials were initially planned to commence in 2013, with the ship to be commissioned in 2014.

In March 2011, it was reported that the project had been affected by the delay in the delivery of the main gearboxes for the carrier. The supplier, Elecon, attributed it to having to work around a number of technical complexities due to the length of the propulsion shafts. Other issues resulting in delays included an accident with a diesel generator and an issue with its alignment. In August 2011, the Defence Ministry reported to the Lok Sabha that 75% of the construction work for the hull of the lead carrier had been completed and the carrier would be first launched in December 2011, following which further works would be completed until commissioning. On 29 December 2011, the completed hull of the carrier was first floated out of its dry dock at CSL, with its displacement at over 14,000 tonnes. Interior works and fittings on the hull would be carried out until the second half of 2012, when it would again be dry-docked for integration with its propulsion and power generation systems.

The ship was launched by his wife, Elizabeth Antony, on 12 August 2013.

By October 2015, the construction of the hull was close to 98 percent complete, with flight deck construction underway. The installation of machinery, piping and the propeller shafts was in progress by January 2016.

In February 2020, all the major structural and outfitting work was declared complete by the government. As of September 2020, Vikrant completed harbour trials while the basin trials will start from October 2020 to check propulsion, electric transmission and shafting systems.

The start of the warship's trials was initially scheduled to begin on 12 March 2020, however construction delays caused that to be moved back to April.

The COVID-19 pandemic has already pushed that back to 2023 and further delays are possible. Indian Navy is expecting to commission Vikrant by the end of 2021.

In March 2020 it was revealed that Indian Navy after commissioning the aircraft carrier will deploy the ship at L&T's shipyard in Kattupalli near Chennai. This was done as the planned naval base in Rambilli near Vishakhapatnam is not ready yet. The navy wants to lease a 260 m berth at Kattupalli shipyard, for 8 years between 2022 and 2030 for interim berthing of the ship, by which time the naval base at Rambilli is expected to come up.