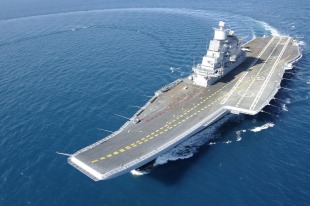 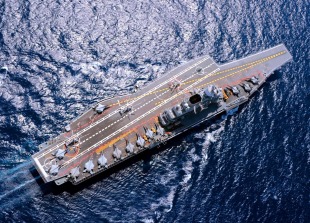 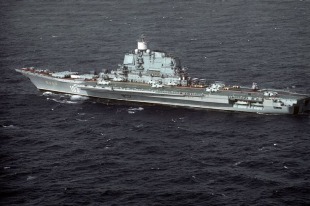 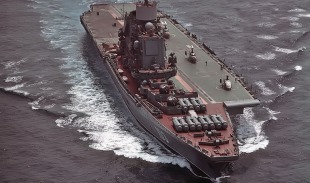 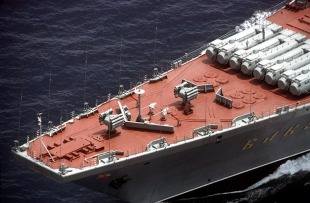 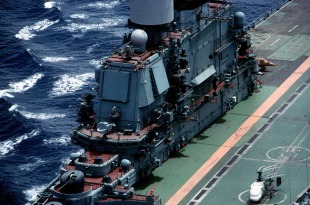 INS Vikramaditya is a modified Kiev-class aircraft carrier and the flagship of the Indian Navy, which entered into service in 2013.

Originally built as Baku and commissioned in 1987, the carrier served with the Soviet Navy and later with the Russian Navy before being decommissioned in 1996. The carrier was purchased by India on 20 January 2004 after years of negotiations at a final price of $2.35 billion. The ship successfully completed her sea trials in July 2013 and aviation trials in September 2013.

She was commissioned on 16 November 2013 at a ceremony held at Severodvinsk, Russia. On 14 June 2014, the Prime Minister of India formally inducted INS Vikramaditya into the Indian Navy and dedicated her to the nation.

Baku entered service in 1987, and was renamed Admiral Gorshkov in 1991, but was deactivated in 1996 because she was too expensive to operate on a post-Cold War budget. This attracted the attention of India, which was looking for a way to expand its carrier aviation capabilities. On 20 January 2004, after years of negotiations, Russia and India signed a deal for the sale of the ship. The ship would be free, while India would pay US$800 million for the upgrade and refit of the ship, as well as an additional US$1 billion for the aircraft and weapons systems. The navy looked at equipping the carrier with the E-2C Hawkeye, but decided not to. In 2009, Northrop Grumman offered the advanced E-2D Hawkeye to the Indian Navy.

The upgrade involved stripping all the weaponry and missile launcher tubes from the ship's foredeck to make way for a «short take-off barrier-arrested recovery» (STOBAR) configuration, converting the Gorshkov from a hybrid carrier/cruiser to a pure carrier.

The announced delivery date for INS Vikramaditya was August 2008, which would allow the carrier to enter service just as the Indian Navy's only light carrier INS Viraat retired. While Viraat's retirement had been pushed out to 2010–2012, it underwent a final refit which enabled her to serve through 2016.

The issue with the delays was compounded by ongoing cost overruns, leading to high-level diplomatic exchanges. India finally agreed to pay an additional US$1.2 billion for the project, more than doubling the original cost. However, ongoing delays with the Vikramaditya's delivery schedule, pushed the delivery to 2013. The indigenous Vikrant-class aircraft carrier was delayed by at least a year and was expected to be commissioned at the earliest in 2013 from the proposed 2012.

In July 2008, it was reported that Russia wanted to increase the price by US$2 billion, blaming unexpected cost overruns on the deteriorated condition of the ship and citing a «market price» for a new carrier of US$3–4 bn. India had paid US$400 million as of November 2008. However, Russia even threatened to scrap the deal altogether if India did not pay the increased amount. In December 2008, government sources in India stated that the Cabinet Committee on Security (CCS) had finally decided in favour of purchasing Admiral Gorshkov as the best option available. The Comptroller and Auditor General of India (CAG) criticised the fact that Vikramaditya would be a second-hand warship with a limited life-span, which would be 60% costlier than a new one, and there was a risk of further delay in its delivery.

The hull work was completed by 2008 and Vikramaditya was launched on 4 December 2008. Around 99% of the structural work and almost 50% of the cabling work had been completed by June 2010. Almost all of the large equipment, including engines and diesel generators, was installed. A naval MiG-29K prototype aircraft was used to test the deck systems of Vikramaditya in 2010.

All reconfiguration work was completed at Severodvinsk, Russia; however it was delayed by three years due to underestimation of the amount of cabling needed. An expert level discussion on technical and financial matters was held between India and Russia to sort out the issues. The MiG-29K entered operational service with India in February 2010. A compromise was finalised and India was to pay an extra undisclosed amount. Russia was to install new systems instead of repairing the old ones.

The ship was to go for harbour trials by early 2011 to ensure it could be handed over to India by December 2012 or so. Dock trials began on 1 March 2011. The focus of these trials was on the main power generation units and the radio-electronic armament systems, manufactured in India. Indian Navy personnel began training on Vikramaditya in April 2011. On 19 April 2012, it was announced that all internal systems were functioning, and the ship was entirely self-contained. Measurement of the ship's magnetic field and centre of gravity were performed before sea trials began.

As completed, Vikramaditya has a larger full load displacement than when the ship was originally launched in 1982 as Baku. 1,750 out of 2,500 compartments of the ship were re-fabricated, and extensive re-cabling was done to support new radars and sensors. The elevators were upgraded, and two restraining stands were fitted, allowing combat aircraft to reach full power before making a ski jump-assisted short take-off. Three arresting gears were fitted on the aft part of the angled deck, and navigation and carrier-landing aids were added to support fixed-wing «short take-off but arrested recovery» (STOBAR) operations.

The major modifications were to allow Admiral Gorshkov to operate as a STOBAR aircraft carrier in Indian service, as opposed to the STOVL configuration the ship was built as. This involved removal of all the armament, including the P-500 Bazalt cruise missile launchers and the four Antey Kinzhal surface-to-air missile bins fitted on ship's bow, to make way for a 14.3°, full-width ski-jump. The 20-ton capacity aircraft lift beside the ship's island superstructure was unchanged, but the aft lift was enlarged and its lift capacity increased to 30 tons. For STOBAR operations, three 30 m arrestor wires and three restraining gears on the stern of the angled deck were fitted. Sponsons were installed to increase the area of the flight deck, to allow the ski-jump to be fitted, for strengthening of arresting gear and runway area, and to lengthen the after end, which allowed an increase to the length of the landing strip aft of the arresting gear. 234 new hull sections were installed to achieve the desired shape, and the total steel added to carry out these modifications amounted to 2500 tons.

The superstructure profile was designed to accommodate the fixed phased array scanners of the Soviet Navy's Mars-Passat 3D air search radar system, along with extensive command and control facilities to conduct an aerial campaign. Extensive revamp of sensors was carried out, with long range air-surveillance radars and advanced electronic warfare suites fitted, which enable the maintenance of a surveillance bubble of over 500 km around the ship. An aft mast was installed to accommodate various communication antennae. These changes needed 2,300 km of new cables, and 3,000 km of new pipes.

The eight original boilers were replaced by new generation, high-pressure boilers, converted to take diesel fuel utilising LSHSD instead of furnace fuel oil, each providing a steam capacity of 100 tonnes per hour. The new boilers are highly efficient and have high levels of automation. They power four propellers in four shaft configuration, producing a total thrust of 180,000 horsepower (134,226 kW) at the shaft, providing a top speed of over 30 knots. Six turbo alternators and six diesel alternators generate 18 MW of electricity to power various equipment. Modern oil-water separators as well as a sewage treatment plant were incorporated to meet international standards. Six new Finnish Wärtsilä 1.5 MW diesel generators, a Global Marine communications system, Sperry Bridgemaster navigation radar, a new telephone exchange, new data link and an IFF Mk XI system were added. Hotel services were improved with the addition of two reverse osmosis plants producing 400 tons of fresh water per day, as well as updated refrigeration and air conditioning. A new galley was installed together with improved domestic services and accommodation for 10 female officers.