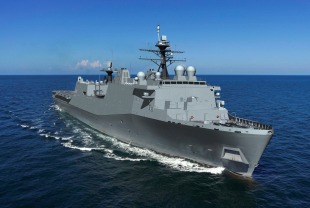 Ingalls has delivered 11 San Antonio-class ships to the U.S. Navy and has three more under construction including USS Harrisburg (LPD-30). The ship will be the 14th in the San Antonio class and the first Flight II LPD. USS Fort Lauderdale (LPD-28) launched in March and is scheduled to deliver in 2021.

The USS Harrisburg (LPD-30) will be the second U.S. Navy vessel named after the city of Harrisburg, Pennsylvania. The first was a troopship acquired by the U.S. Navy during World War I that served in commission from May 29, 1918 to September 25, 1919. That ship also served with the U.S. Navy in the Spanish-American War under another name. In addition to being the capital of Pennsylvania, Harrisburg is home to a number of Department of Defense facilities including the Naval Support Activity, Mechanicsburg.