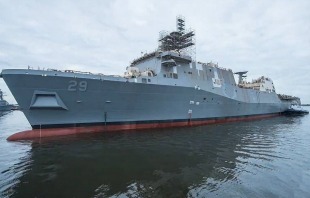 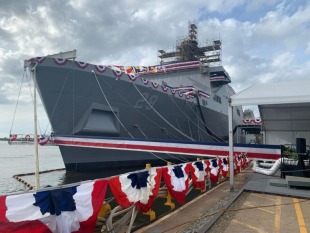 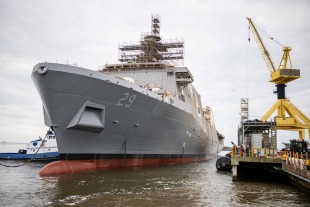 Like her immediate predecessor, USS Fort Lauderdale (LPD 28), Richard M. McCool Jr. will be a «transitional ship» between the current San Antonio-class Flight I design and future Flight II vessels, starting with USS Harrisburg (LPD 30), and as such will feature design improvements developed in connection with the Navy's development of the LX(R)-class amphibious warfare ship, (which is intended to replace the current Whidbey Island-class and Harpers Ferry-class dock landing ships). Richard M. McCool Jr. incorporates the changes that will be introduced in Fort Lauderdale intended to reduce the cost compared to the San Antonio-class, including: simplified bow works, replacement of the forward and aft composite masts with steel masts, removal of structures from the boat valley, and a stern gate which is open at the top. In addition, unlike Fort Lauderdale, Richard M. McCool Jr. will use the Enterprise Air Surveillance Radar (EASR) volume air search radar.