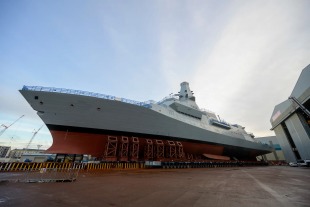 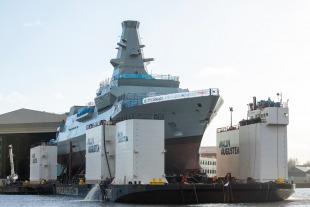 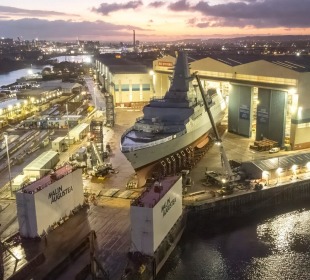 HMS Glasgow is the first Type 26 frigate to be built for the United Kingdom's Royal Navy. The Type 26 class will partially replace the navy's eight Type 23 frigates, and will be a multi-mission warship designed to support anti-submarine warfare, air defence and general purpose operations.

The ship is being assembled on the River Clyde in Glasgow. The first steel was cut for Glasgow in July 2017 with the ship expected to be delivered in 2024 and operational in about 2026. In January 2018, work started on the second hull section.

On 18 April 2021, the fore section of the ship moved out from its building shed on the Clyde, and on 1 May 2021 was joined with its aft section for the first time. The MOD envisaged her entry into service as 2026 but this could be 'brought forward' by one year to 2025.