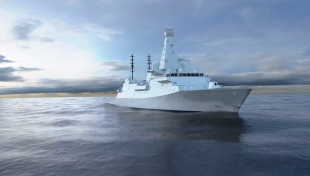 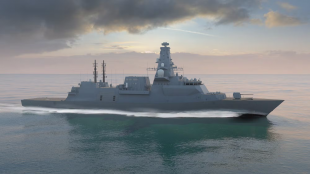 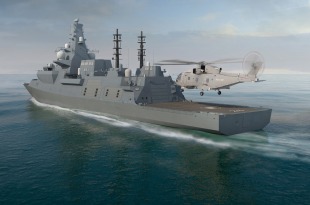 The Type 26 frigate or City-class frigate is a class of frigate being built for the United Kingdom's Royal Navy, with variants also being built for the Australian and Canadian navies. The programme, known as the Global Combat Ship, was launched by the UK Ministry of Defence to partially replace the navy's thirteen Type 23 frigates, and for export. Its primary role is to conduct advanced anti-submarine warfare missions while supporting air defence and general purpose operations. The type is the first naval platform shared between Australia, Canada and the United Kingdom since the Tribal-class destroyer.

The programme began in 1998, under what was then known as the Future Surface Combatant (FSC). However, by March 2010, this procurement programme had evolved to become the Global Combat Ship, following the announcement of a four-year, £127 million design contract being awarded to BAE Systems Maritime – Naval Ships. The design passed Main Gate 1 in early 2015, with the Demonstration Phase starting 1 April 2015. In August 2015 the first long lead items for Type 26 were ordered, with manufacturing then expected to begin in 2016 and the first Type 26 to be delivered in 2023. In November 2016 it was announced that first steel would be cut for the eight Royal Navy ships in summer 2017. They will be built at BAE Systems' Govan and Scotstoun yards on the River Clyde in Glasgow. The contract award to manufacture the Type 26 was announced by BAE Systems on 2 July 2017, with steel cut for the first of the class, HMS Glasgow on 20 July 2017 by the then Secretary of State for Defence, Sir Michael Fallon.

The Global Combat Ship is designed with modularity and flexibility in mind to enhance versatility across the full range of operations, including maritime security, counter piracy, counterterrorist and humanitarian and disaster relief operations. The adaptable design will facilitate through-life support, ensuring upgrades can easily be undertaken as technology develops. As of 2017, BAE Systems' website suggests a displacement of 6,900 tonnes, a length of 149.9 m (492 ft) a beam of 20.8 m (68 ft) and a top speed in excess of 26 knots (48 km/h). The Global Combat Ship will have a core crew of 157 with room for a total of 208.

The Global Combat Ship is designed for up to 60 days' endurance and a range of approximately 7,000 nautical miles (13,000 km). Located at the stern are facilities allowing for the deployment of rigid-hulled inflatable boats, unmanned surface vehicles or a towed array sonar. A large Integrated Mission Bay and hangar is located amidship, enabling a variety of missions and associated equipment. Aircraft similar in size to the Boeing Chinook can be flown off the large flight deck, and the hangar can accommodate up to two helicopters the size of an AgustaWestland AW159 Wildcat or AgustaWestland Merlin. The hangar also has space to accommodate unmanned aerial vehicles.

The Royal Navy's version of the Global Combat Ship is referred to as the Type 26 frigate. This will be equipped with the Type 997 Artisan 3D search radar and Sea Ceptor (CAMM) air-defence missiles launched via 48 vertical launching system (VLS) canisters. Additionally, 24 Mark 41 «strike-length VLS» cells are positioned forward of the bridge. On 8 July 2021, it was confirmed that the Anglo-French FC/ASW anti-ship missile would be brought into service on the Type 26,[16] which is likely to be launched from the Mark 41 VLS. The Mark 41 is also capable of firing missiles such as the Tomahawk land-attack cruise missile, anti-submarine rockets, or quad-packed ESSMs.

The propulsion system of the RN ships will have a gas turbine direct drive and four high speed diesel generators driving two electric motors in a combined diesel-electric or gas (CODLOG) configuration. In 2012 Rolls Royce repackaged the MT30 used in the Queen Elizabeth-class aircraft carriers so that it would fit into smaller ships. The MT30 will be used in the Type 26. BAE Systems have suggested that some customers will install gas turbine engines and others will prefer to sacrifice 2–3 knots of speed by choosing cheaper diesel engines. The CODLOG configuration for propulsion is a simpler version of the Combined diesel-electric and gas (CODLAG) propulsion used on the Type 23 which this ship is to replace, and both of the Global Combat Ship's design contemporaries – the Queen Elizabeth-class aircraft carrier and the Type 45 destroyer – use integrated electric propulsion (IEP).