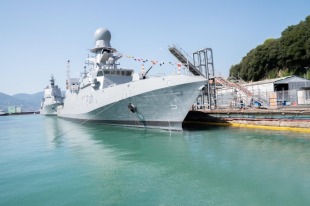 Al Zubarah (F101) is the lead ship of the Doha-class corvettes built for the Qatari Emiri Navy.

Al Zubarah was laid down in June 2018 in Fincantieri shipyard in Muggiano, Italy. She was launched on 27 February 2020, and expected to arrive in Qatar in 2021.