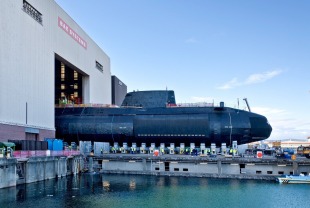 HMS Agincourt (also known as Astute Boat 7) is an Astute-class nuclear-powered fleet submarine under construction for the Royal Navy and the seventh in her class. The boat's name was confirmed in May 2018.

The confirmation for the seventh and final Astute-class boat was given in the Strategic Defence and Security Review of October 2010, although the order was not placed until 2018.

On 11 December 2012 the British government announced that long-lead items had been ordered for boats 6 and 7.

On 6 March 2018 the defence procurement minister Guto Bebb confirmed that the MoD had gained Treasury approval to sign a contract for Astute Boat 7, after a leaked Navy document had suggested it might not be procured as a cost-saving measure. In May 2018 it was reported that construction of Boat Seven had begun.

In October 2012 it was confirmed that Agincourt would have a PWR2 reactor like the rest of the Astute class. Agincourt's nuclear reactor will not need to be refuelled during the boat's 25 year service. Since the submarine can replenish her air supply and purify water underway and while submerged, she will be able to circumnavigate the planet without resurfacing. The submarine's main limitation will be from the three months supply of food carried for the 98 officers and ratings.

Agincourt will have provision for up-to 38 weapons in six 21-inch (533 mm) torpedo tubes. The submarine will be capable of using Tomahawk Block IV land-attack missiles with a range of 1,000 miles (1,600 kilometres) and Spearfish heavyweight torpedoes.