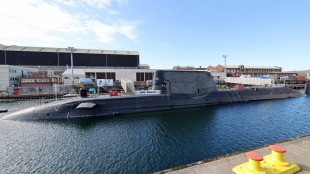 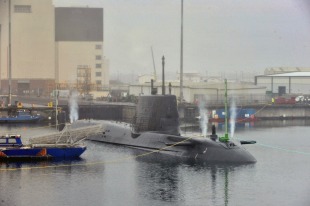 On 25 March 2010, BAE Systems were given the go-ahead by the government to begin construction on boats 5 and 6 (Anson and Agamemnon), being given a £300 million contract for the «initial build» of boat 5 and «long lead procurement activities» for boat 6. Later that year work was begun on the pressure hull and reactor compartments and construction is currently ongoing as of 2011. On 15 September 2011 it was announced that boat 5 would be named Anson; it was previously believed that boat 5 would be Agamemnon and boat 6 Anson. Her keel was ceremonially laid on 13 October 2011. On 19 November 2015, a possible new contract worth £1.3 billion was signed for HMS Anson.

Anson's nuclear reactor will not need to be refuelled during the boat's 25-year service. Since the submarine can purify water and air, she will be able to circumnavigate the planet without resurfacing. The main limit is that the submarine will only be able to carry three months' supply of food for 98 officers and ratings.

Anson will have provision for up-to 38 weapons in six 21-inch (533 mm) torpedo tubes. The submarine will be capable of using Tomahawk Block IV land-attack missiles with a range of 1,000 miles (1,600 kilometres) and Spearfish heavyweight torpedoes.