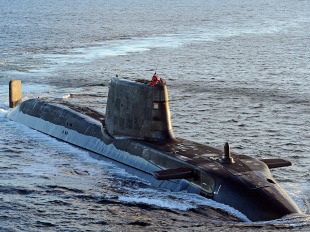 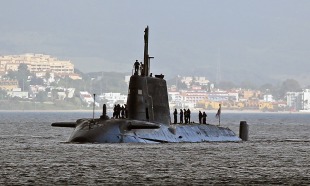 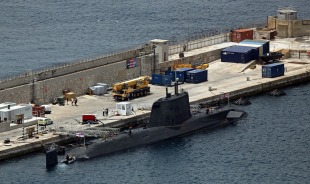 HMS Ambush is an Astute-class nuclear fleet submarine of the Royal Navy, the second boat of her class. Ambush is the third vessel, and the second submarine, to bear the name in Royal Naval service. She was ordered in 1997, laid down in 2003 and commissioned in 2013.

Ambush's nuclear reactor will not need to be refuelled during the boat's 25-year service. Since the submarine can purify water and air, she will be able to circumnavigate the planet without resurfacing. The main limit is that the submarine will only be able to carry three months' supply of food for 98 officers and ratings.

Ambush has provision for up-to 38 weapons in six 21-inch (533 mm) torpedo tubes. The submarine is capable of using Tomahawk Block IV land-attack missiles with a range of 1,000 miles (1,600 kilometres) and Spearfish heavyweight torpedoes.

Ambush was ordered from GEC's Marconi Marine (now BAE Systems Submarine Solutions) on 17 March 1997. She was laid down at Barrow-in-Furness on 22 October 2003, officially named on 16 December 2010, launched on 6 January 2011, completed her initial dive test on 30 September 2011, and departed Barrow for sea trials on 15 September 2012. Ambush was commissioned in a ceremony at HM Naval Base Clyde on 1 March 2013.

Ambush was scheduled to conduct her maiden operations sometime in 2014. She has already conducted trials, linking up with RFA Diligence. She has also conducted torpedo and Tomahawk cruise missile tests, with early signs showing that they were successful. Ambush sailed down to Brazil in 2014 and also made a port call in Port Canaveral. In April 2015, Ambush participated in Exercise Joint Warrior, the largest military exercise held in Europe, alongside 55 other naval ships of NATO navies. She further participated in Exercise Dynamic Manta 15.

On 20 July 2016, while surfacing on an exercise in the Strait of Gibraltar, Ambush was in collision with the Panama flagged merchant ship Andreas, sustaining significant damage to the top of her conning tower where some of her sonar equipment is housed. It was reported that no crew members were injured during the collision and that the submarine's nuclear reactor section remained completely undamaged. Repairs cost £2.1 million and the commander, who was training a group of students at the time, was sentenced to forfeiting a year of seniority for negligently hazarding the vessel.