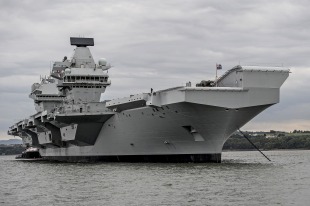 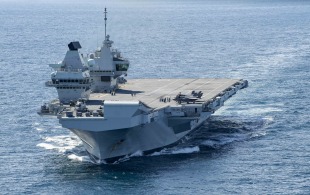 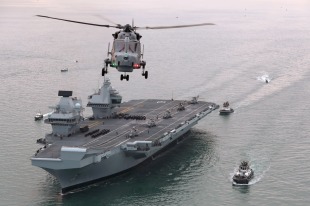 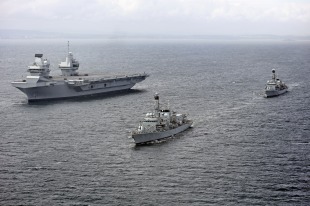 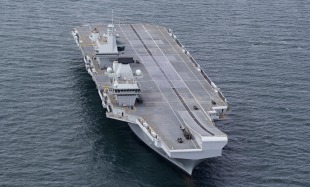 HMS Queen Elizabeth is the lead ship of the Queen Elizabeth class of aircraft carriers, the largest warships ever built for the Royal Navy of the United Kingdom. Capable of carrying close to 60 aircraft, she is named in honour of the first Queen Elizabeth, a World War I era super-dreadnought, which in turn was named after Queen Elizabeth I. The carrier Queen Elizabeth will carry her namesake ship's honours, as well as her Tudor rose-adorned crest and motto.

Due to the absence of catapults or arrestor wires, Queen Elizabeth is designed to operate V/STOL aircraft. The air wing will typically consist of F-35B Lightning II multirole fighters and Merlin helicopters for airborne early warning and anti-submarine warfare. The design emphasises flexibility, with accommodation for 250 Royal Marines and the ability to support them with attack helicopters and large troop transports such as Chinooks. She is the second Royal Navy vessel to bear the name Queen Elizabeth, and is based at HMNB Portsmouth.

Queen Elizabeth three times the size of the Invincible-class, and has the ability to carry approximately three times as many aircraft. Despite this, Queen Elizabeth has marginally fewer crew than the Invincible-class. She is approximately three times as large as the former HMS Ocean. The ship has two superstructures, or islands, one for navigation and ship's operations and the other for flight control and aerial operations. The islands can take on each other's function if one is incapacitated.