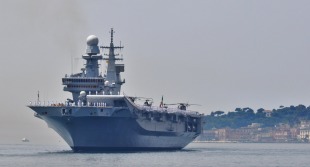 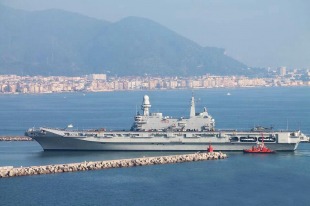 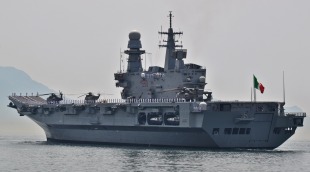 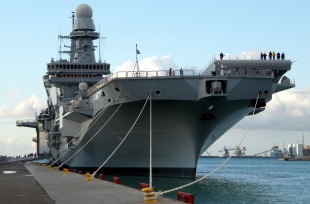 Italian aircraft carrier Cavour is launched in 2004. It is the flagship of the Italian Navy.

The ship is designed to combine fixed wing V/STOL and helicopter air operations, command and control operations and the transport of military or civil personnel and heavy vehicles. The 134 m (440 ft), 2,800 m2 (30,000 sq ft) hangar space can double as a vehicle hold capable of holding up to 24 main battle tanks (typically Ariete) or many lighter vehicles (50 Dardo IFV, 100+ Iveco LMV), and is fitted aft with access ramps rated to 70 tons, as well as two elevators rated up to 30 tons for aircraft. Cavour can also operate as landing platform helicopter, accommodating heavy transport helicopters (AgustaWestland UH-101A ASH) and 325 marines (91 more, on option). The Cavour has a displacement of 27,900 tons but can reach more than 30,000 tons at full military capacity.

The Italian Navy will replace its 16 Harriers with 15 (originally 22) Lockheed Martin F-35B Lightning IIs. The F-35B schedule is uncertain, but it is planned to modify Cavour to support the F-35B by 2016. Cavour will have room for ten F-35Bs in the hangar, and six more parked on deck.

Cavour was laid down by Fincantieri in June 2001, and was launched from the Riva Trigoso shipyard in Sestri Levante, on 20 July 2004. Sea trials began in December 2006, and she was officially commissioned 27 March 2008. Full operational capability (FOC) was reached 10 June 2009.

On 19 January 2010, Cavour was dispatched to Haiti as part of Operation White Crane, Italy's operation for 2010 Haiti earthquake relief. This was the first mission of the aircraft carrier, where it supplemented international efforts to provide relief for the victims of the 2010 Haiti earthquake.

It is reported that modernization works on the Cavour has been completed. In May 2020, it was announced the Italian aircraft carrier will undertake a preparatory training before sailing to the U.S. where the ship will conduct trials with the F-35B STOVL.