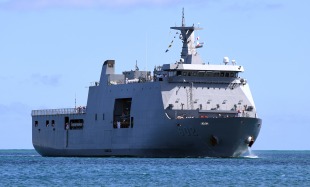 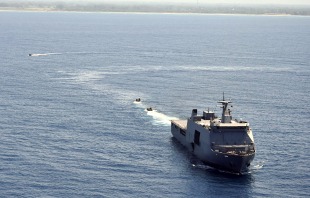 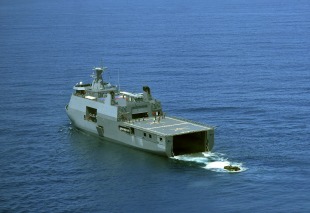 BRP Davao del Sur (LD-602) is the second ship of the Tarlac-class landing platform dock of the Philippine Navy. She was launched on 29 September 2016 and she was commissioned into Philippine Navy service on 31 May 2017.

During the second week of May 2018, the BRP Davao del Sur participated in the Balikatan Exercise with US Forces together with the BRP Ramon Alcaraz (FF-16).

BRP Davao Del Sur was deployed with BRP Andrés Bonifacio (FF-17) to RIMPAC 2018, starting their voyage on June 11, 2018 and rendezvousing with ships from several regional navies and arriving at Pearl Harbor on June 27, 2018.

In June 2019, the ship transported the Marine Battalion Landing Team from Zamboanga City to its new assignment in Palawan. Along the way, the BRP Davao del Sur conducted a Meeting Procedure and Photo Exercise with the Escort Flotilla One of the Japan Maritime Self Defense Force off the coast of Cagayan de Tawi-Tawi in the Sulu Sea. The Japanese ships consisted of the JS Izumo (DDH-183), JS Murasame and JS Akebono.

In August 2019, the ship and its 300-man Contingent sailed from Vladivostok, Russia to meet up at sea with the BRP Conrado Yap (PS-39) in South Korea for a Group Sail back to the Philippines. Both ships were then given Arrival Honors at the Manila South Harbor which included a Meeting Procedure at sea with the BRP Emilio Jacinto (PS-35).