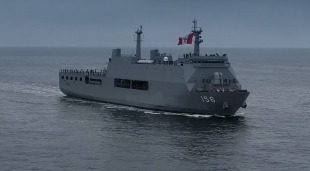 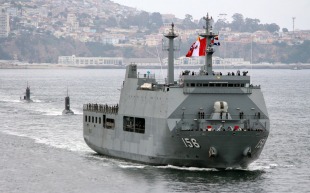 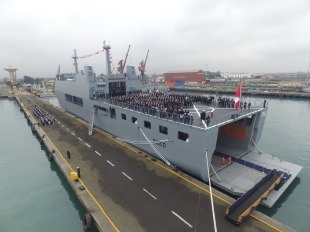 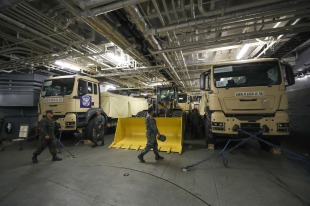 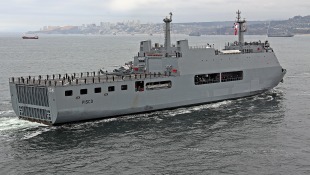 The landing platform dock BAP Pisco (AMP-156) belonging to the Peruvian Navy that was built between 2013 — 2017 by Shipyard Marine Industrial Services of Peru, known as SIMA.

The design of the Pisco was carried out by South Korea's Daesun Shipbuilding & Engineering Co., Ltd. in collaboration with Peru's state owned shipyard, SIMA. It is a Makassar-class landing platform dock, with the class originally being developed in the early-2000s for the Indonesian Navy.

The Peruvian Ministry of Defense a memorandum on 10 April 2012 for two Makassar-class LPDs and in early-2013, Peru paid a contract of $60 million to construct the Pisco, the first of the two LPDs designated for the Peruvian Navy. The Pisco would then be constructed in Peru by SIMA with the continued cooperation from Daesun Shipbuilding & Marine Engineering.

Pisco's design includes accommodation of 157 crew members and up to 400 marines. The well deck can handle two 23-meter Landing Craft Vehicle Personnel while an additional cargo deck in the ship can hold up to 14 LAV II vehicles, which Peru had recently acquired from Canada in mid-2016.

The flight deck of the Pisco has the capability to hold two Sikorsky SH-3 Sea King helicopters of the Peruvian Naval Aviation while an incorporated hangar can store an additional helicopter. The ship uses a roll-on/roll-off system, and can reportedly transport 450 troops for up to 30 days.

One of the Pisco's first tasks began on 11 February 2019 requiring the ship to deliver 500-tons of humanitarian aid from Callao to Arequipa, Moquegua and Tacna in response to heavy rains and landslides in southern Peru.