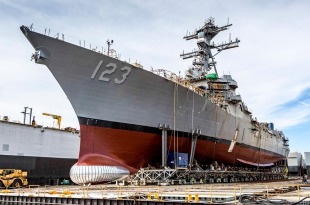 Ingalls Shipbuilding was awarded the contract for Lenah Sutcliffe Higbee in June 2013, and began fabrication of the vessel in January 2017. The ship's keel was laid in a ceremony at the Ingalls shipyards on 14 November 2017. She was christened on 24 April 2021 in Pascagoula, Mississippi.