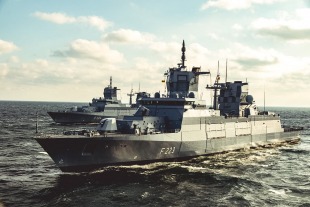 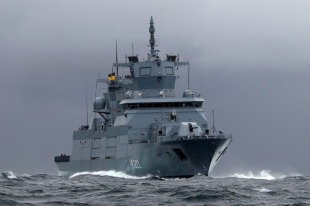 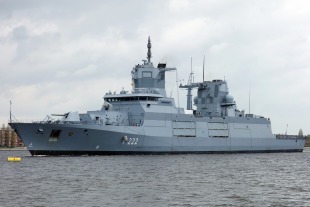 The F125 Baden-Württemberg-class frigates are a series of frigates of the German Navy, which were designed and constructed by ARGE F125, a joint-venture of Thyssen-Krupp and Lürssen. The Baden-Württemberg class have the heaviest displacement of any class of frigate worldwide. They are to replace the Bremen class. They are primarily designed for low and medium intensity maritime stabilization operations, where they are supposed to provide sea-to-land tactical fire support, asymmetric threat control at sea and support of special forces.

In contrast to the Bremen class, which were built with Cold War-era scenarios in mind, the Baden-Württemberg-class frigates will have much enhanced land-attack capabilities. This will better suit the frigates in possible future peacekeeping and peacemaking missions. For such reasons, the frigates will also mount non-lethal weapons.

Major design goals are reduced radar, infrared and acoustic signatures (stealth technology), something that was introduced to the German Navy with the Brandenburg-class frigates and was further developed with the Sachsen-class frigates and Braunschweig-class corvettes.

Other important requirements are long maintenance periods: It should be possible to deploy Baden-Württemberg-class frigates for up to two years away from homeports with an average sea operation time of more than 5,000 hours per year (that's nearly 60%) which includes operation under tropical conditions. For this reason, a combined diesel-electric and gas arrangement has been chosen for the machinery. This allows the substitution of large and powerful diesel engines for propulsion and sets of smaller diesel generators for electric power generation with a pool of med-sized diesel generators, reducing the number of different engines.

To enhance survivability of the frigates, important systems are laid out in the two island principle, i.e. present at least twice at different places within the ship. This is also visible in the superstructures, which are split in two larger pyramidal deckhouses. The aerials of the Cassidian TRS-4D active electronically scanned array radar will be distributed over the two pyramids. This will ensure that the ship remains operational in case of severe damage, such as accidents or enemy action. It will also allow the frigates to keep station if needed when something breaks down and no replacement is available.

The Baden-Württemberg-class frigates are equipped with ten guns for defence against air and surface targets. The vessels are also armed with non-lethal weapons, such as water cannons and searchlights for non-provocative deterrence and defence. Beyond capabilities that might be provided by the ship's helicopter(s), sensors for anti-submarine warfare have not been integrated into the platform while the ship's air defence capability is limited to relatively short-range point defence systems.