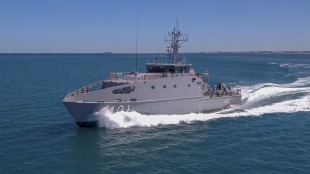 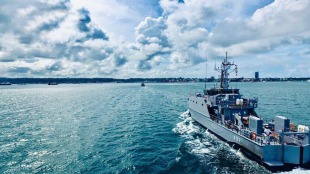 HMPNGS Ted Diro (P401) is the first Guardian-class patrol boat to be completed. Australia designed and provided four Pacific Forum-class patrol vessels to Papua New Guinea in 1987 and 1988, and in 2015 confirmed she would be replacing those vessels with four larger, and more capable, Guardian-class vessels.

Ted Diro was the first Guardian-class vessel to have her keel laid in July 2017. She was the first to be launched, in May 2018. She began her formal sea trials on August 9, 2018. The patrol vessel is scheduled to be commissioned in late October, when her acceptance trials are completed.

On October 22, 2018, the Post Courier reported that delivery was scheduled for December. Diro, head of the PNGDF Major General Gilbert Toropo and Angus Campbell, Chief of the Australian Defence Force, attended the vessel's commissioning, on February 1, 2019.

In August 2019 two warships of the Japan Maritime Self-Defense Force visited Port Moresby. The Japanese vessels hosted the crew of Ted Diro, together with local VIPs, and her crew hosted visiting Japanese personnel on tours of Ted Diro.

On October 17, 2019, The Australian reported that Ted Diro's engines had broken down, and she had to be towed back to Cairns, for repairs.