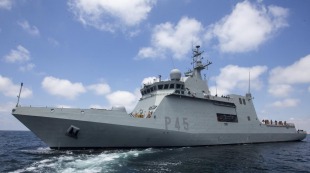 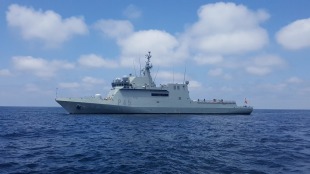 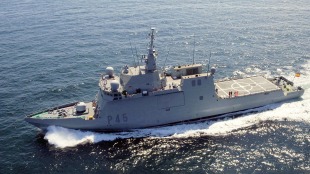 Audaz (P-45) is an offshore patrol vessel and the fifth of the Meteoro class created for the Spanish Navy. It is the fourth Navy ship to carry this name. The patrol vessel was built in the Navantia's shipyard in San Fernando.

On May 7, 2014, SEPI announced that it had approved the construction of two new units, one to be built at the Cadiz shipyard in San Fernando / Puerto Real and the other at Ferrol. The first sheet metal cut for these vessels, was carried out simultaneously in the shipyards of the bay of Cadiz and those of the Ferrol estuary on December 5, 2014. Order No. DEF/1564/2015 was published in the Official State Gazette on June 26, 2015, which names of these two ships as Audaz (P-45) and Furor (P-46).

The Audaz was assigned to the Naval Base of Cartagena where it arrived on September 2018.

It first mission was assigned on 20 August 2019. It consisted of heading to the island of Lampedusa, Italy to escort the Open Arms vessel to the port of Mahon, Spain after italian interior minister, Matteo Salvini, denied the ship's entry to the country.