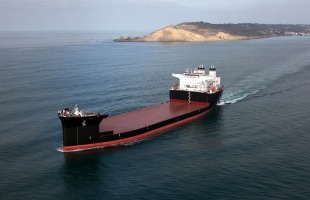 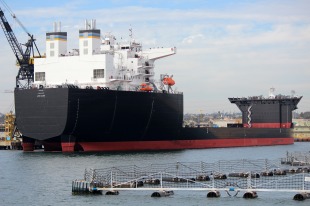 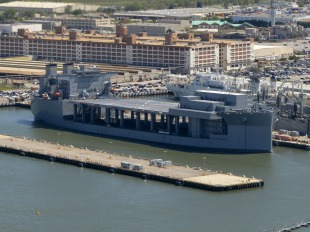 In 2012, a third MLP, USS Lewis B. Puller (ESB-3), was added to the contract and reconfigured as an Expeditionary Mobile Base (ESB), or formerly known as an MLP Afloat Forward Staging Base (AFSB). All three ships have been delivered to the U.S. Navy.

The Navy plans to procure six Expeditionary Mobile Bases (ESBs) in total, with a fourth (ESB-6) ordered in FY2018, a fifth (ESB-7) ordered in FY2019, the sixth and final ship, (ESB-8) with an order date yet to be determined.

The Expeditionary Transfer Dock concept is a large auxiliary support ship to facilitate the 'seabasing' of an amphibious landing force by acting as a floating base or transfer station that can be prepositioned off the target area.[4][5] Troops, equipment, and cargo would be transferred to the MLP by large-draft ships, from where it can be moved ashore by shallower-draft vessels, landing craft like the Landing Craft Air Cushion (LCAC), or helicopters. In order to transfer vehicles from the larger ships to the ESD, the vessels were originally to be fitted with a Vehicle Transfer System; a ramp connecting the two ships alongside, and able to compensate for the movements of both vessels while underway.

A preliminary design by General Dynamics envisioned a ship that carried six LCACs, with the ability to turn around (dock, unload or load, then launch) two landing craft simultaneously from the stern. The ESDs were to host a brigade-size force, sail at 20 knots (37 km/h; 23 mph), and have a maximum range of 9,000 nautical miles (17,000 km; 10,000 mi). Each ship was to cost US$1.5 billion to build, but cutbacks to defense spending planned for the fiscal year 2011 budget forced the downscaling of the design in mid-2009.

General Dynamics identified the civilian Alaska-class oil tanker (built by the subsidiary National Steel and Shipbuilding Company) as a suitable basis for an «ESD 'Lite'», with the design modified into a float-on/float-off vessel that could be built for US$500 million per ship. As part of the cost trade-off, the Vehicle Transfer System was scrapped in favor of skin-to-skin mooring of a host ship alongside the ESD, and the LCAC complement was reduced to three. The new design is 785 feet (239 m) long, with a beam of 164 feet (50 m), a top speed of over 15 knots (28 km/h; 17 mph), and a maximum range of 9,500 nautical miles (17,600 km; 10,900 mi). Converteam supply an integrated power system and vessel automation system for the ESD.

Unlike the first two Expeditionary Transfer Dock, ESB-3 and ESB-4 serves as Expeditionary Mobile Base (ESB) vessels to support special forces missions, counter-piracy/smuggling operations, maritime security operations, and mine clearance, as well as humanitarian aid and disaster relief missions. In order to support these extended roles, the ESBs will have military detachments in addition to the civil service mariners.

ESB vessels are designed to support low-intensity missions, allowing more expensive, high-value amphibious warfare ships and surface combatant warships to be re-tasked for more demanding operational missions for the U.S. Navy. These ESB variants are slated to operate in the Middle East and the Pacific Ocean.

Like the first two Expeditionary Transfer Dock, the overall design of the T-ESB-3 and T-ESB-4 is based on the hull of the civilian Alaska-class oil tanker. Both ESB variants will be outfitted with support facilities for its mine-sweeping, special operations, and other expeditionary missions. An accommodation barge will also be carried to support up to 298 additional mission-related personnel. Their aviation facilities include a 52,000 sq ft (4,800 m2) flight deck with landing spots for two heavy-lift transport CH-53 helicopters, as well as additional deck space for two more CH-53s. The Lewis B.Puller will also have a helicopter hangar, an ordnance storage magazine, underway replenishment facilities, and deck space for mission-related equipment storage. The addition of a flight deck makes the ship more top-heavy, and so less stable in heavy seas. The deck is made with two operating spots and two parking spots, plus room to store two in the hangar. The mission deck's ability to submerge to launch landing craft was disabled and instead a crane, capable of carrying 11 metric tons (12 short tons) and moving a 41 ft (12 m) boat in up to sea state 3, carries watercraft, towed arrays, and unmanned vehicles into the water.