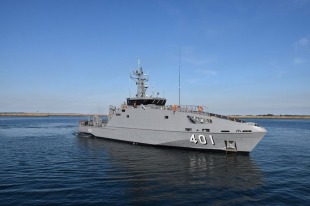 RFNS Savenaca (401) is a Guardian-class patrol boat, being built in Australia for Fiji's Navy. She will replace RFNS Kula, a Pacific Forum patrol vessel provided by Australia in 1994. She will be the seventh vessel of the class to be completed, and the second of two to be delivered to Fiji. She will be commissioned in March or April of 2020.

Savenaca arrived in Walu Bay on April 28, 2020, where she was greeted by Minister of Defence Inia Seruiratu.

In May, 2020, Savenaca was dispatched with humanitarian aid to areas stricken with the Covid 19 virus. Australia had helped by flying in supplies, including a large portable generator.