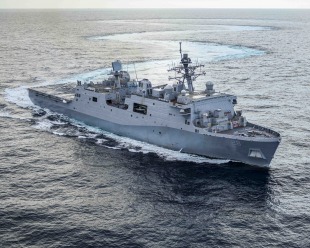 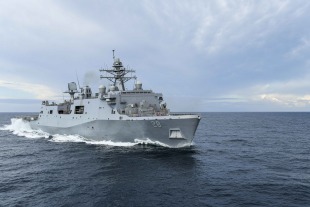 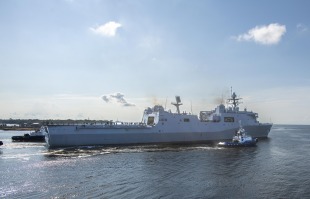 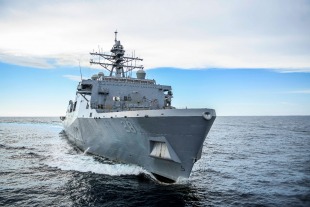 Fort Lauderdale will feature design improvements developed in connection with the Navy's development of a next-generation dock landing ship, known as the LX(R)-class amphibious warfare ship. The LX(R) is intended to replace current Whidbey Island-class and Harpers Ferry-class dock landing ships. In 2014, the Navy commenced design of LX(R) based on a modified San Antonio-class design. Because this design work is in progress, the Navy has created design innovations and cost-reduction strategies around the San Antonio-class design, and the Navy believes that it can apply these innovations and strategies to Fort Lauderdale, allowing her to be built at reduced cost. The main design features intended to reduce the cost of Fort Lauderdale compared to the San Antonio-class on which she is based are simplified bow works, replacement of the forward and aft composite masts with steel masts, removal of structures from the boat valley, and a stern gate which is open at the top. This will make Fort Lauderdale a «transitional ship» between the current San Antonio-class design and future LX(R) vessels.

Fort Lauderdale will incorporate a high temperature superconductor-based mine protection degaussing system built by American Superconductor to reduce the magnetic signature of the ship.

On 7 March 2016, a local news outlet reported that the Navy intended to name a littoral combat ship after Fort Lauderdale, but two days later that was determined to be an error as a result of miscommunication with the Navy, and that a new amphibious transport dock would actually bear the name.