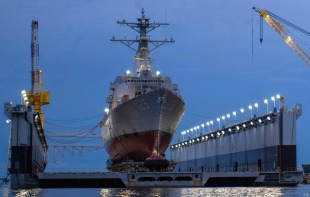 USS Jack H. Lucas (DDG-125) will be an Arleigh Burke-class (Flight III) Aegis guided missile destroyer, first of the Flight III variants and 75th overall in the class. She is named after Captain Jacklyn H. Lucas, recipient of the Medal of Honor. On 17 September 2016, she was named by Secretary of the Navy Ray Mabus.