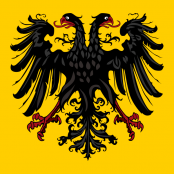 The Reichsflotte (Imperial Fleet) was the first navy for all of Germany, established by the revolutionary German Empire to provide a naval force in the First Schleswig War against Denmark. The decision was made on 14 June 1848 by the Frankfurt Parliament, which is considered by the modern German Navy as its birthday.

In December 1849 the imperial government was replaced by a federal commission. In 1851 the German Confederation was fully re-established. The German states such as Prussia, Hanover and Austria had a quarrel regarding the ships and the costs to sustain a fleet. In 1852 the Confederation decided to dissolve the fleet and sell the ships.