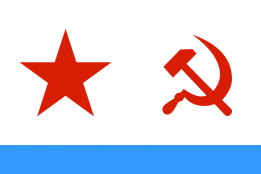 The Soviet Navy was the naval arm of the Soviet Armed Forces. Often referred to as the Red Fleet, the Soviet Navy was a large part of the Soviet Union's strategic plan in the event of a conflict with opposing super power, the United States, the North Atlantic Treaty Organization (NATO), or another conflict related to the Warsaw Pact of Eastern Europe. The influence of the Soviet Navy played a large role in the Cold War (1945-1991), as the majority of conflicts centered on naval forces.

The Soviet Navy was divided into four major fleets: the Northern, Pacific, Black Sea, and Baltic Fleets; under separate command was the Leningrad Naval Base. The Caspian Flotilla was a smaller force operating in the land-locked Caspian Sea. Main components of the Soviet Navy included Soviet Naval Aviation, Naval Infantry (Soviet Marines), and Coastal Artillery.

After the dissolution of the Soviet Union in 1991, Russia inherited the largest part of the Soviet Navy and reformed it into the Russian Navy, with smaller parts becoming the basis for navies of the newly independent post-Soviet states.