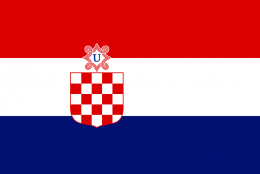 The RMNDH was only a small part of the armed forces of the NDH, largely due to restrictions imposed by Italy. To avoid these restrictions, the Germans raised the Croatian Naval Legion which fought as part of the German Navy in the Black Sea campaign between 1941 and 1944. After the Italian capitulation in September 1943, the Germans transferred several captured Italian vessels to the RMNDH, although all of the significant ones had been lost by December 1944 when the remaining personnel were assigned to duties ashore to circumvent their defection to the Yugoslav Partisans. The RMNDH was disbanded in May 1945 with the collapse and defeat of the NDH.

The RMNDH was established by the Law on the Establishment of the Army and Navy issued on 10 April 1941 by retired Austro-Hungarian Lieutenant Colonel (later Marshal and Commander-in-chief of the armed forces) Slavko Kvaternik, with the approval of the German authorities. The task of the navy, along with the army, was to defend the new state against both foreign and domestic enemies. The Italians opposed the formation of a navy by the Independent State of Croatia (Croatian: Nezavisna Država Hrvatska, NDH), as they considered the Adriatic to be Mare Nostrum (Our Sea). The Germans supported the Italians in this, so the development of the RMNDH along the Adriatic coast was initially very restricted. On 18 May 1941, the Agreement on Military Matters Pertaining to Coastal Areas was signed in Rome – the second of three Treaties of Rome signed that day. In this bilateral treaty with Italy, Croatia agreed to demilitarize the coastal area entirely, restricting itself to civil administration there. It also agreed not create any naval units in the Adriatic except for policing and customs purposes. By July 1941, the RMNDH consisted of two commands, the Coast and Maritime Traffic Command, and the River and River Traffic Command, and had its headquarters in the NDH capital, Zagreb.

The River and River Traffic Command was headquartered in Sisak, at the confluence of the Kupa, Sava, and Odra rivers about 57 km (35 mi) southeast of Zagreb. It consisted of seven river stations – at Sisak, Brod na Savi, Hrvatska Mitrovica, Zemun, Petrovaradin, Vukovar and Osijek, and a naval infantry battalion based at Zemun (later Zagreb). The River Command Flotilla, headquartered in Zemun, was also part of River and River Traffic Command, and comprised two former Royal Yugoslav Navy river monitors (Sava and Bosna), two river gunboats – Ustaša and Bosut, two river minelayers – Zagreb and Zrinski, and six motor boats. The flotilla was organised into two patrol groups, each consisting of one monitor, one gunboat, one minelayer and three motor boats, and the flotilla flagship, the river tugboat Vrbas.

The Law Decree on the Armed Forces of 18 March 1942 re-organised the RMNDH as a branch of the Croatian Home Guard (Croatian: Domobrani). The RMNDH was always a small part of the armed forces, numbering only 1,262 men in September 1943. After the Italian capitulation, the Germans recovered the former Yugoslav torpedo boat T7 from the Italians and handed it over to the RMNDH under her Yugoslav designation. Her crew came under the influence of the Yugoslav Partisans, and were preparing to mutiny when the Germans intervened. Two more former Yugoslav vessels were captured from the Italians and handed over to the RMNDH by the Germans; the light cruiser Dalmacija (renamed Zniam), and the Malinska-class mining tender Mosor. Croatian crews also served on German-operated vessels, for example twenty Croats served aboard the minelayer Kiebitz, ex-Italian auxiliary cruiser Ramb III.

Zniam was stranded on 19 December 1943 and was torpedoed by Royal Navy Motor Torpedo Boats (MTBs) two days later. On 24 June 1944, T7 and two German S-boats were sailing between Šibenik and Rijeka, protecting German sea supply routes along the Adriatic, when they were attacked by three Royal Navy MTBs near the island of Kukuljari, south of Murter Island. The MTBs fired two torpedoes at T7, but missed, so they closed and engaged her with their guns, setting her ablaze. She was beached, and 21 crew were rescued by the MTBs. The British crews later examined the wreck, capturing five more crew, then destroyed her with demolition charges. The river monitor Bosna struck a mine in the same month, and Sava was scuttled on 8 September 1944 when her crew deserted to the Partisans. Mosor was stranded on Ist Island near Zadar on 31 December 1944, and remained there until after the end of the war. By this stage, the RMNDH consisted of a flotilla of small coastal craft stationed at Rijeka. The entire flotilla tried to desert to the Partisans in December 1944, but all but one craft (carrying the commander of the flotilla) was prevented from doing so by the Germans. The Germans disarmed the remaining vessels and sent the crews to Zagreb where they formed a special unit for service on land.