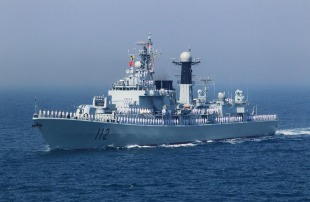 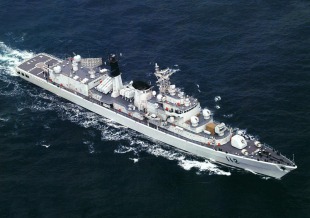 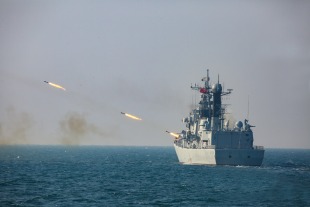 The Type 052 (NATO/OSD Luhu-class destroyer is a class of destroyers developed in the People's Republic of China (PRC) for the People's Liberation Army Navy (PLAN). The Type 052 was an intermediate between the obsolescent Type 051 and the modern Type 052B destroyers. They were the first PLAN destroyers powered by gas turbines, and the first PLAN ships with modern combat direction systems (CDS). They were also part of the first generation of PLAN warships armed with surface-to-air missiles in the form of the short-range Crotale (called HQ-7 in Chinese service.)

The Type 052 used subsystems imported from the United States and the European Union. The embargo after the 1989 Tiananmen Square protests and massacre ended the supply of and support for those subsystems, limiting production to two ships and likely impacting their operating efficiency due to system integration issues. Afterward, China turned to Russia and Ukraine for technology.

The Type 052 was the first PLAN warship where the CDS was designed before the ship. The CDS, possible the ZKJ-6 based on the Italian IPN-10 or IPN-20, began development in 1983 and underwent land-based testing in December 1986. Two ships were ordered in 1985, but delayed by export orders to Thailand. The first, Harbin, was laid down in November 1990 and commissioned in July 1994. Qingdao was commissioned in March 1996.

A major refit began in 2010 for Harbin and Qingdao in 2011 which included changes to sensors and weapons, gas turbine replacement, and some hull work.